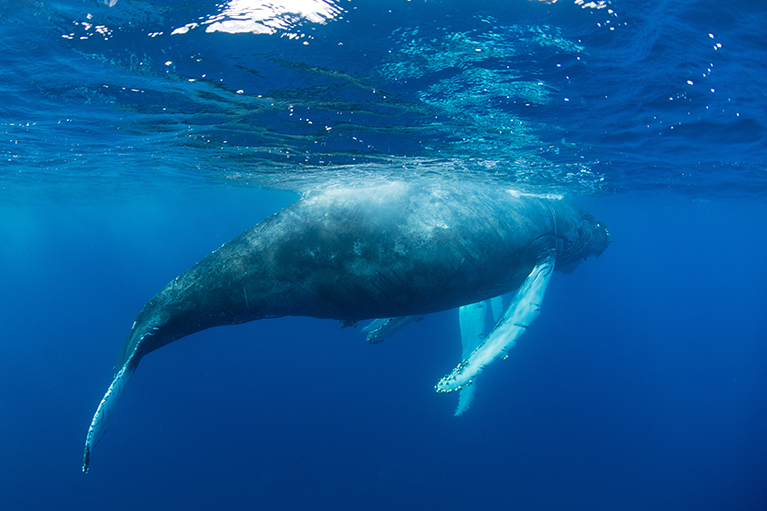 Whale Watching in Turks and Caicos

As each year comes to a close in the Turks and Caicos, a special gift is left in its wake—and it’s kind of a big deal, weighing up to 80,000 pounds

We’re talking about humpback whales, which migrate from the northern Atlantic Ocean to the warmer waters of the Silver Bank near the Dominican Republic to breed and give birth between December and April. The whales travel in pods, so where there’s one, there are at least a few more. And nothing will make you feel quite as small as seeing a pod of humpback whales on their journey to warmth—or better yet, seeing a humpback whale breach (or “jump” out of the water).

If you’re in the Turks and Caicos during whale season, the best places to get a glimpse of these giant marine mammals are the islands of Grand Turk and Salt Cay because of their close proximity to the Columbus Passage. Whale sightings are not uncommon off the Caicos Islands (which includes Providenciales), but you’re more likely to see them closer to the passage. Local airline interCaribbean offers multiple daily flights from Providenciales to Grand Turk, from which Salt Cay is just a short ferry ride away.

If you’re fortunate enough to see the whales underwater, you’ll be likely hear them, too. The sounds of the humpback whales create a song that can be heard from miles away underwater. Snorkeling and scuba diving encounters are reported every year, but if you’d rather stay dry, there are plenty of boating excursions that will give you the chance to see the whales up close.

Try any of these boat operators for a chance to see humpback whales in the Turks and Caicos:

Although you’re more likely to see whales from Salt Cay or Grand Turk, sightings do happen on Providenciales, as well as North, Middle and South Caicos. 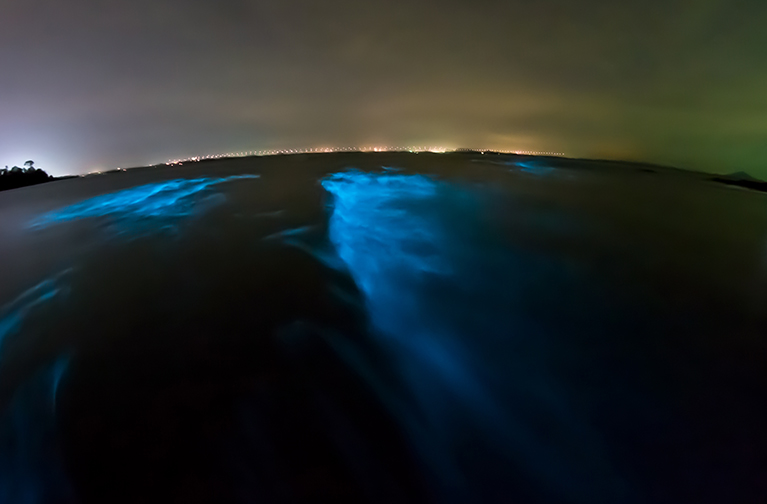 Every month after the full moon, a natural phenomenon lights up the ocean, creating the appearance of twinkling stars in the sea.

But these flashes of light that shimmer just below the ocean surface are, in fact, the creation of life. It’s the mating dance of the Odontosyllis enopia—known locally as the glow worm, a bioluminescent marine worm—and it’s a remarkable light show you can’t miss if you’re in the Turks and Caicos at just the right time.

The show begins three to five days after the full moon and almost an hour after sunset. That’s when the female glow worm rises from the sandy seafloor where she resides to the surface of the water, swimming in circles and releasing her eggs—all while emitting a bright fluorescent chemical that attracts her male counterpart. While swimming to his mate, attracted by her beckoning glow, the male worm also “glows” as he makes his way to his partner. He then releases his sperm, creating even more light. All this from these tiny marine worms, with the females growing to about 20 mm long, and the males growing only to 12 mm.

It’s a brilliant, albeit brief (about 15 minutes), affair that you have to see to believe. And it’s suitable for an audience of all ages.

But the only way to witness the spectacle of the glow worm is to be out on the water, particularly in shallow areas. And you have a few options as far as getting out there to see the show.

The Atabeyra, operated by Sun Charters, is a 70-foot sailing vessel that has operated as a charter boat in the Turks and Caicos since 1998. Originally a cargo ship that transported goods between Hispaniola and the Turks and Caicos, the Atabeyra is a favorite among locals. After picking guests up from the Blue Haven dock, your captain will cruise around the Caicos banks and return to the channel to catch the glow worm light show. Need more incentive? A refreshing rum punch is also included in the trip.

If you’re looking for a more active glow worm experience, try a guided standup paddleboarding excursion. Imagine paddling out to sea on your board, when all of a sudden tiny blinking lights begin to illuminate the water just below your feet—talk about surreal.

However you decide to see the glow worms, be sure that you do. It’s not every day you get to see a marine mating dance that lights up the underwater world.